To all railwaymen the correct time is all-important and it came every day from Marylebone at 10 am. to all stations, signal boxes and offices. All other business was cleared off the lines just prior to this event. Half-Hunters came out from waistcoat pockets of chief inspectors, service watches from entitled uniform grades, and wrist watches checked by the younger staff, all being adjusted if necessary. (Editors note: Legend has it that Napoleon invented the first Half Hunter watch when, in the heat of battle, he lopped off the cover of his watchcase to see the time) 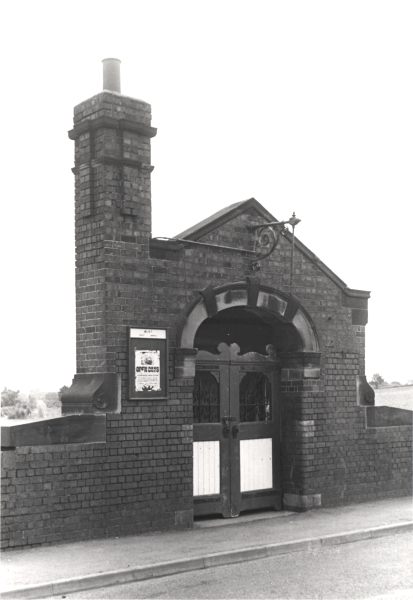 The entrance to the Great Central station at Quorn & Woodhouse. After passing through these gates, passengers would descend a covered staircase before emerging on to the station's single 'island' platform. See Details

Quorn and Woodhouse was a popular station for releasing Racing Pigeons as the platform was open and there were no telegraph wires or obstructions. They often arrived in specially constructed 'Pigeon Carriages', one of which still survives at Loughborough, having been rebuilt by the present Great Central Railway volunteers.

Christmas was always looked forward to as a time when presents were showered onto the staff. Particularly as there was always a large hamper from Beaumanor Hall.

Produced in 1900 for the Great Central Railway, this hand bill is advertising cheap excursion tickets to the Hull Fair and Pigeon Show. See Details