The Great Central railway was a part of my life for many years, from birth in 1942 through to its closure in the sixties. It had no direct influence over me, my father did not work for it, our family home was at least a mile away from it, we had no known relatives associated with it, in short, it was just another railway. But in fact, it was never just that, it had a character all of its own, a charisma that radiated out and touched all around it. Our other local line was the Midland Region (old L.M.S.) route from Leicester to Birmingham with stations at South Wigston, Blaby, Narborough, Elmesthorpe, Hinckley, Nuneaton and onward to Birmingham. Generally, this was more use to local folk than the G.C. with its stations from Leicester to
Whetstone , Ashby Magna, Lutterworth, Rugby and onward to London Marylebone.

The Standard 5MT was R. A. Riddles' development of William Stanier's 'Black 5' 4-6-0's, and proved to be a popular design. This example is working a parcels train through Whetstone, circa 1963. See Details

Nevertheless, it was the G.C. that embossed itself upon our memories with the passing through of such prestigious named trains as the Master Cutler, the South Yorkshireman and other workings such as the Bournemouth - York. These expresses were almost always hauled by a Gresley A3 Pacific, some of the more regular ones being nos. 60111 ENTERPRISE, 60052 PRINCE PALATINE, 60103 FLYING SCOTSMAN and 60104 SOLARIO, all resplendent in polished B.R. Brunswick Green with their crimson and cream "Blood and Custard" coaching rakes. SOLARIO briefly appeared in B.R.'s experimental colour blue. 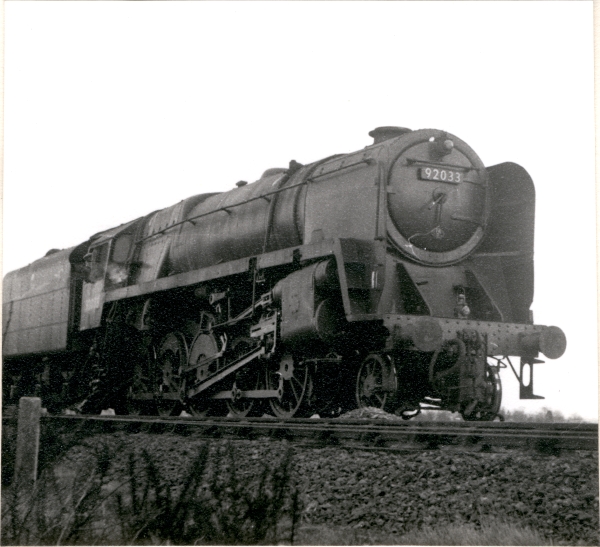 Our Dads used to take us down to Whetstone park to watch these and other trains passing over the "Three Arches" bridge just south of Whetstone station. If we had been particularly good and the weather was nice, we were allowed the treat of paying one penny of our spending money and obtaining a platform ticket to sit on the station to watch the trains. (I suppose this was the forerunner to our eventual hobby of train-spotting, on which many hours were spent in later years!) 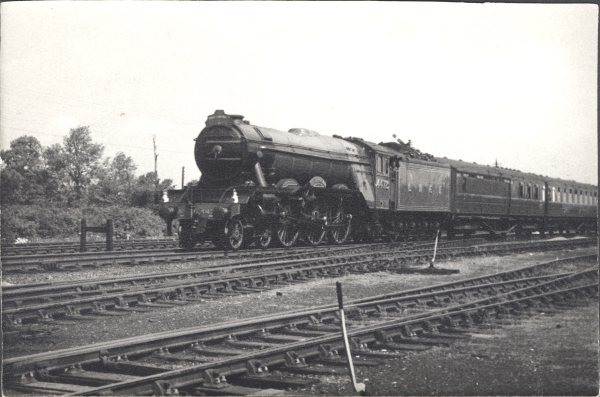