Misson Impossible? The Navvies and the Preachers

At most of the villages and settlements in which navvies working on the London Extension lived, the Navvy Mission Society provided a mission room and a lay preacher for the benefit of the workmen and their families. The services and Sunday School were intended to provide the navvies and their children with an understanding of the bible and an enthusiasm for the message of the gospel, something of which navvies were thought to be largely ignorant. 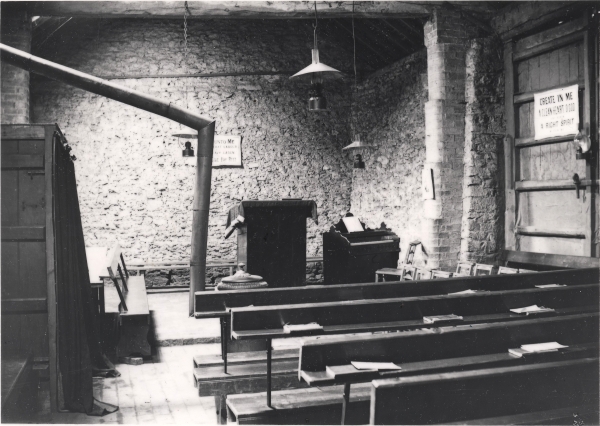 Inside a navvy mission room at Staverton, Northamptonshire. Located within a disused outbuilding, these premises would have served those navvies at work on Contract No.4 (Rugby to Woodford). Note the biblical texts placed on the walls, and the simple pulpit from which the 'message' was preached. See Details

Formed in 1877 following concerns for the men working at Lindley Wood Reservoir, the Navvy Mission Society was perhaps the greatest of the organisations tasked with the spiritual welfare of navvies. Ever since the beginning of the railway age in the 1830s, the moral and spiritual condition of navvies had been a cause for concern. In the mid-nineteenth century particularly, the men were seen as immoral, godless creatures with little or no knowledge of the bible, and whose daily life centred on depraved and debauched activities like drinking, gambling, fighting and womanising. However, some people also saw the navvy in a more romantic way. To many, they were primitive men possessed of unnatural strength and endurance - rugged men who were hard and resilient. Their lack of education, and the poor housing and working conditions which they were forced to endure, kept them from the civilising benefits of Victorian society, and deprived the navvies of the self worth and self respect that engenders good behaviour. Religion was seen as something that could help to tame the navvy, and as something that would eventually provide them with a more positive and acceptable role in society. 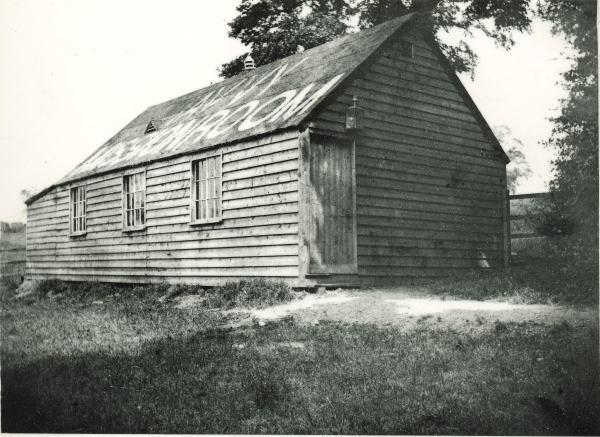 This simple structure is a purpose built mission room at Helmdon, Northamptonshire. In common with many other mission halls that could be found on the London Extension, the building is not obviously one of religious significance. Only the large text written on the roof proclaims this hut to be a place of worship. See Details

By the time the London Extension was being built in the 1890s, railway construction was no longer accompanied by large bands of navvies intent on riotous behaviour. Living and working conditions had improved dramatically, as had the moral conduct of the men themselves. Even so, navvies continued to participate in prize-fights and gambling, and the infamous navvy drinking sprees, or randies, had not yet become a thing of the past. And so despite their advances, Victorian moralists still considered the navvy to be ripe for conversion. To this end, the Navvy Mission Society maintained a significant presence throughout the Line's construction. 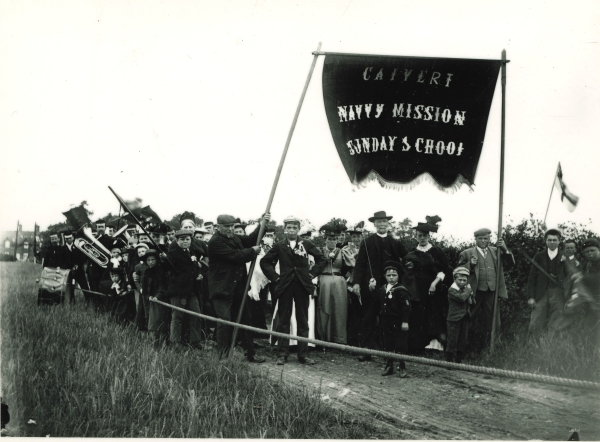 A remarkable photograph, taken around 1897, showing the members of Calvert Navvy Mission Sunday School on an outing in Buckinghamshire. With banners flying and a brass band doubtless striking up a stirring tune, this certainly looks to be a rousing occasion. See Details

The missions themselves were located either in modest, purpose built halls of wood and corrugated metal, or in existing structures such as barns and outbuildings. Inside, the halls were plain and functional. The furniture consisted of simple wooden benches and chairs, and besides a selection of pious extracts that were nailed to the walls, there was little attempt at decoration. This utilitarian approach was both a result of the way in which the Navvy Mission Society was organised, and also of their methods of religious instruction. Although a national institution, it was largely the responsibility of local committees to organise, and pay for, the mission hall in their area. Also, the emphasis centred solely on the attendance and participation of the flock. Therefore the conventions of appearance and formality that applied to buildings and parishioners elsewhere within the Church of England, were not only economically and physically unattainable, but were even undesirable. 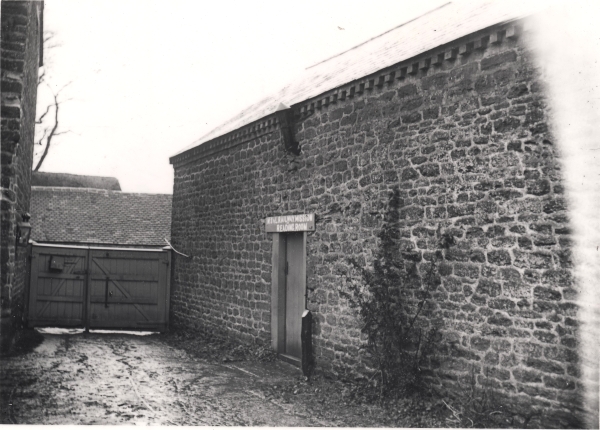 This is an exterior view of the modest outbuilding that was used for the Mission Reading Room at Staverton, Northamptonshire. With local committees of the Society mostly having to pay for the halls within their area, buildings such as this provided a practical and inexpensive space in which to house the navvy missions. See Details

As for the missionaries, these were laymen from the working classes, many of whom had been navvies themselves. Doubtless this helped in establishing a bond between the mission and the community, although some missionaries were still asked to give a short demonstration with pick and shovel before they could gain the respect of the navvies! Aside from regular services, readings and Sunday School, the missionaries went about the villages and settlements distributing bibles and copies of the Quarterly Letter to Navvies, the newsletter that expressed the Society's purpose and opinions. They would visit the sick and injured, and help to organise activities which did not focus on gambling and drinking. 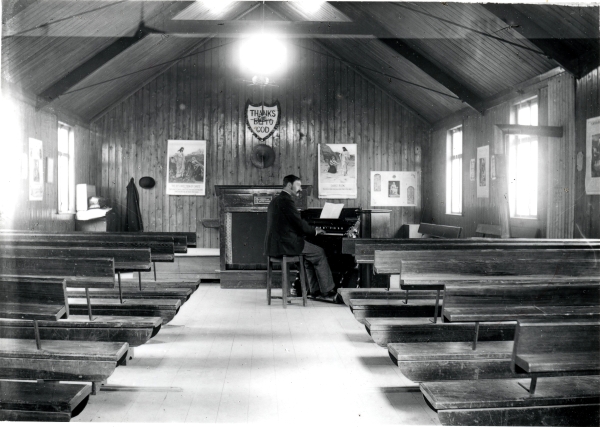 A view along the aisle towards an organist practising in the Navvy Mission room at Loughborough. Images depicting the life of Jesus Christ adorn the walls, and the Mission's motto, 'Thanks Be To God' is painted on a wooden shield above the pulpit. These humble surroundings helped to promote the simple, uncompromising message with which the Society hoped to reach their flock. See Details

It is difficult to be precise about the impact which the Navvy Mission Society had on the families at work on the Last Main Line. Exactly what proportion of the navvy communities participated is unknown, but the halls and services appear to have been well attended, as were the Sunday School outings for the navvies' children. The missionaries seem to have been well liked and respected, and many preachers must have succeeded in reducing the petty crime, drunkenness and bad language that had plagued the navvies' reputation for so long. 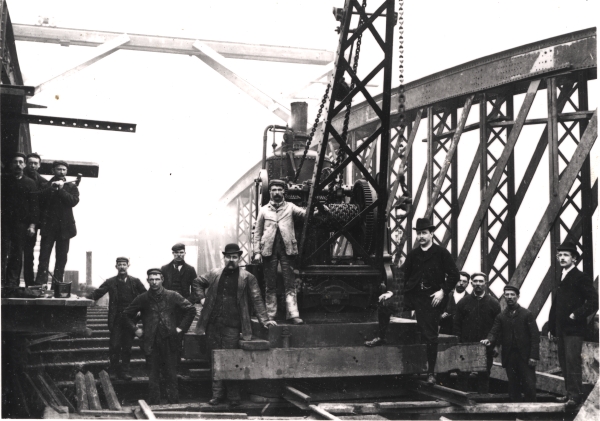 A gang of navvies pose with a missionary (standing fifth right) during construction of the bowstring girder underbridge that carried the London Extension across Braunstone Gate, Leicester. Most of the missionaries were drawn from the working classes, and despite their much valued role within the Navvy Mission Society, these lay preachers were actively discouraged from seeking ordination. See Details