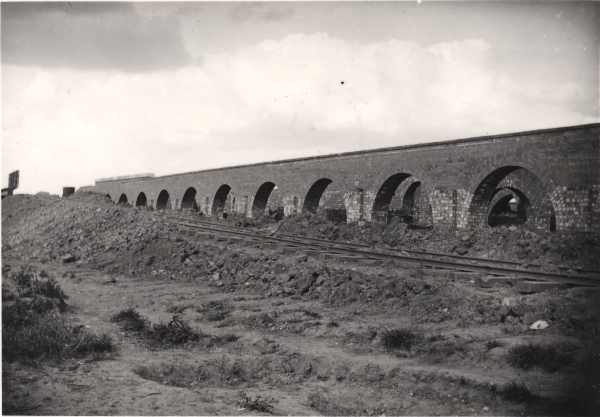 Looking north at the building of the 'foundations of Whetstone station', Leicestershire , c1897 See Details

On another occasion much earlier, I was ten years old at the time, my friend and myself had just come out of Sunday School on a warm summer's day and decided to go up on the railway, mooching around the goods yard attached to the station. We were doing no harm to anything or anyone, and being familiar with our surroundings, we were certainly no risk to ourselves or any other. However, a wandering Railway Policeman (who, in retrospect, must have been the only one to have ever strayed that far from Leicester) appeared from nowhere, called us to attention, observed that we were trespassing on the railway and took our names and addresses including the initials of our fathers.

TRESPASSERS WILL BE PROSECUTED says the sign, we were! Letters to our fathers informed us that we had been fined ten shillings each with instructions how to pay.

So, in spite of having no direct association with the line, the line and its activities have played a part in my life and left me with many happy and amusing memories of its existence and influence.

This affection for the Great Central lives on in our support for the restored system now being operated out of Loughborough and my only regret is that it is now almost impossible to contemplate restitution of the line through Leicester to Whetstone and beyond.