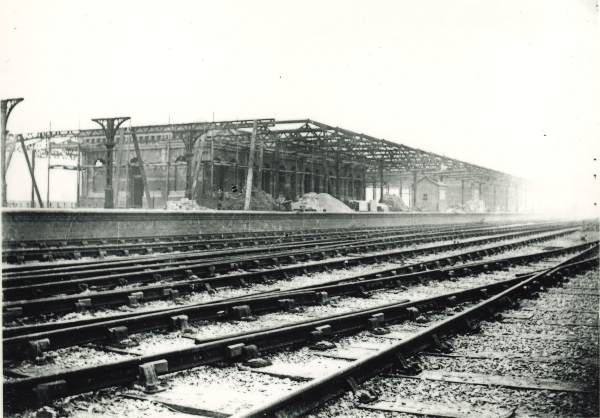 Leicester Central Station under construction, circa 1897. The photograph provides a fine illustration of the island platform, and clearly shows how the tracks ran around the outside of the platforms, rather that between them. See Details

The station confines were situated between Northgate Street to the north and Bath Lane to the south. Once over the impressive new 'bowstring' girder bridge over Northgate Street, the viaduct flared out to either side to accommodate the station's island platform and the six running lines that ran around either side of it. The majority of stations on the London Extension used the island style platform. These utilised one platform with lines running on either side as opposed to having separate platforms with the tracks running between them; the latter required bridges or crossings to get from one platform to another.

The viaduct itself was around 190 ft wide beneath the station and built from Staffordshire Blue engineers bricks. It was made up of both open and closed arches, the open arches eventually finding usage as the homes for small businesses. The arches were only interrupted where the viaduct crossed Soar Lane, All Saints Road and Welles Street, as steel girder bridges were required to carry the railway over these roads. These bridges were so wide that they were almost tunnel-like, so the walls were lined with buff glazed bricks to try to improve the lighting. At the midpoint of the viaduct some 20 ft beneath the station platforms, a subway was built to provide access to the station from Jarvis Street on the west side. This led through to the main booking hall and parcels office, which were located at ground level on the opposite side of the viaduct. 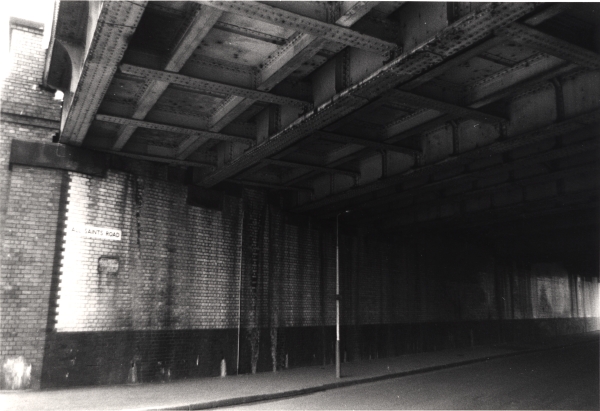 All Saints' Road bridge as seen in March 1977. The great width of the viaduct at this point is clearly apparent, as are the glazed bricks on the abutments. However, looking at the condition of the bricks, it is doubtful that they created any extra light by this date. See Details

At the southern end of the station, where the viaduct crossed over the old Jewry Wall Street, was an interesting piece of craftsmanship which predated the railway by two thousand years. It was of course the Blackfriars Roman pavement, which had been rediscovered in a cellar during the demolition and clearance of the site. Rather than just build on top of it, the Railway Company was asked to build a special chamber around the pavement, which was roofed in by a thick glass panel allowing the mosaic to be viewed from the station platforms above. Access to the chamber was entrusted to a local shopkeeper who would provide public admission upon request. The mosaic itself, however, remained the property of the Leicester Corporation. 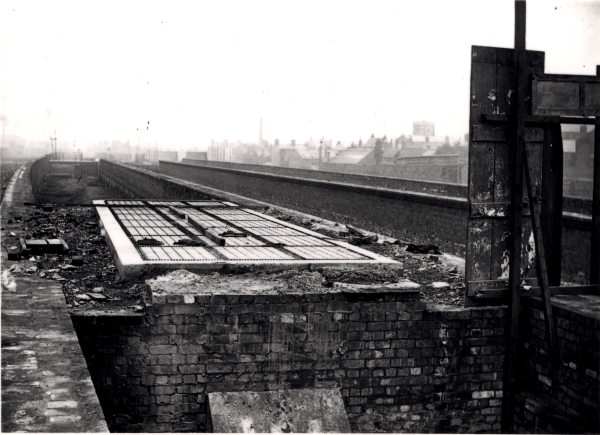 The special chamber built around the Blackfriars Mosaic was roofed in by thick glass panels that were built into the station platform's surface. This glass not only provided light to the chamber, but also allowed passengers to view the mosaic from the station above. This image shows the chamber before the platforms were completed in 1897. See Details