The 1920s and the General Strike 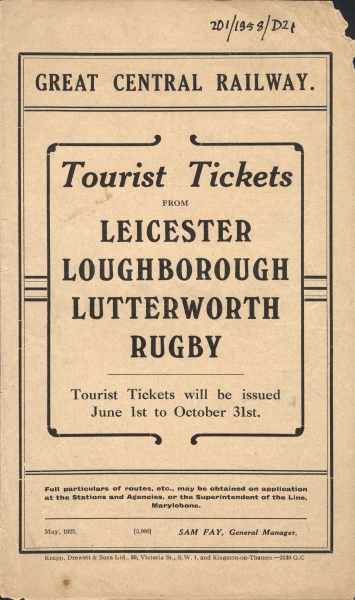 The front cover of a Great Central Railway leaflet produced in May 1922. Inside are the prices of the company's tourist tickets, available for journeys from Leicester, Loughborough, Lutterworth and Rugby to towns and cities all over the country. See Details

In 1923, Quorn & Woodhouse Station, along with the rest of the Great Central, became part of the London & North Eastern Railway.
The 1926 General Strike was a disaster for the railways. The Station Master remained at his post, with the assistance of a volunteer porter, the Hon. Curzon-Herrick from Beaumanor Hall. Sometimes only one train a day passed through Quorn & Woodhouse before the strike ended. 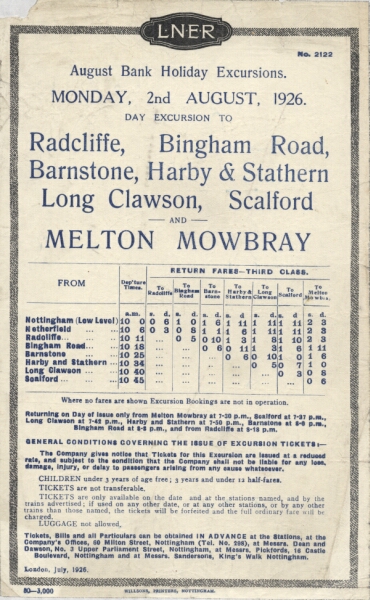 A hand bill produced by the LNERailway in 1926 to advertise its cheap excursions which were available for the August bank holiday. See Details

In 1927 Quorn & Woodhouse entered the 'Best Kept Station' competition, part of which was the station name along the bank - a feature which is still there today. Unfortunately, they did not win, but a photograph did appear in the Leicester Mercury.

The station still flourished, but by 1928, it was becoming affected by the birth of local bus companies. Commuters found these buses more convenient for some of their purposes. The station, which up to then had always been crowded with people going to Leicester and Nottingham, was never quite the same again.