Slightly outside our area, but the original route of the G.C.R. was planned to deviate after Quorn & Woodhouse to pass through Swithland village on a bridge close to the Griffin Inn, across country through the site of the Reservoir Inn at Cropston, then through Anstey to Leicester Central. It was never built as Lord Lanesborough at Swithland Hall objected. He also wanted a station built near to Swithland reservoir. This was never built either, although there is still a blocked up doorway in the reservoir bridge that would have formed the station entrance. 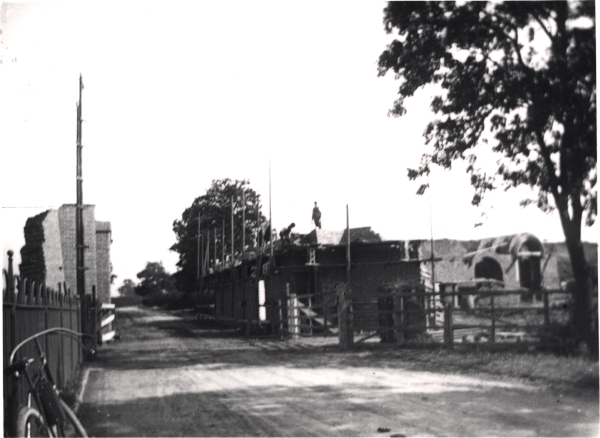 Work in progress on the site of the proposed Great Central station at the southern tip of Swithland Reservoir, Leicestershire. Although the bridge was eventually completed, there was never a station built on this site. See Details

In 1969, the station and the line were officially closed down by British Railways. However a group of determined enthusiasts would not allow the G.C.R. to die. By 1973 they were able to negotiate a deal with British Railways to run the section between Loughborough and Quorn & Woodhouse as a private railway. It was hard work, and eventually, with the co-operation of the local Councils, the railway was extended to Belgrave & Birstall (re-named Leicester North). Now in 2004, with main line standard double track through Quorn & Woodhouse, our very own village station is probably the only one in the World where Main Line steam trains can still be seen regularly stopping or speeding through non-stop in both directions. 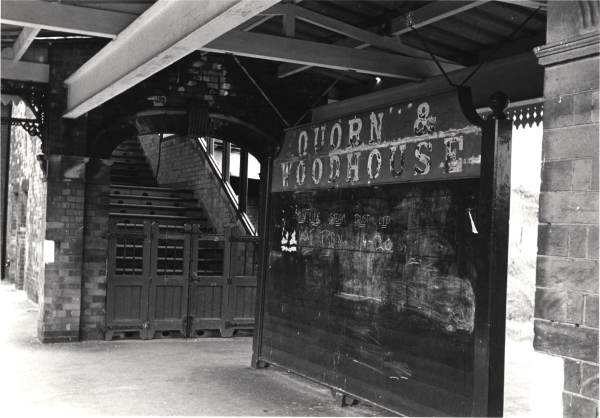 The words 'Main Line Steam Trust Ltd' chalked on the board, proclaim the beginnings of what is now the Great Central Railway preserved line, an ambitious but successful project that brought an eight mile stretch of the London Extension back from extinction. See Details

Quorn & Woodhouse Station is still serving the area, just as it always has done, and will continue to do so for many years to come, but that is another story.

The southern end of the 'island' platform at Quorn & Woodhouse Station, taken in 1976 after the creation of the Main Line Steam Trust. See Details