Quorn & Woodhouse had its moments of glory as a Royal Station. Occasionally a telephone call was received from a Royal Equerry. "Please arrange for the London express to stop for two First Class passengers". The Booking Office would be cleaned up, and the Prince of Wales, later to become King Edward VIII then arrived, often in riding habit, having enjoyed an outing with the Quorn Hunt. A porter would be posted outside the Booking Office, while the Prince changed inside, eventually being told "you can come in now". Meanwhile the Station Master waited on the platform for the express to stop, and another porter with clean hands and shining buttons was ready with the Royal luggage. He would usually receive a half-crown tip. It was all very friendly, if a little clandestine. 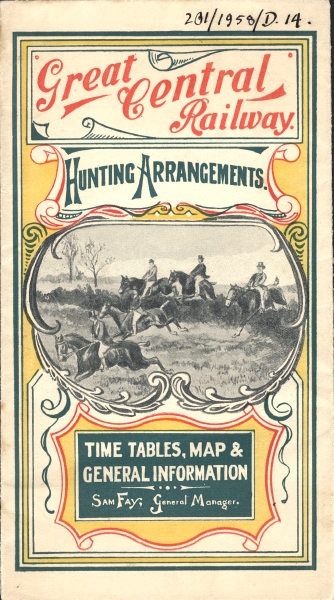 The cover of a leaflet produced by the Great Central Railway in 1902 entitled 'Hunting Arrangements'. See Details

On one occasion a red carpet arrived, and was fixed right up the stairs to the road then fastened down. The morning express from London stopped, and out came - not the Prince, but Jack Hylton and his band, with a mountain of luggage, all bound for Beaumanor Hall. The afternoon express also stopped. This time out stepped the Prince and his Royal party, with yet another mountain of luggage, arriving for another spot of hunting with the Quorn. The porters worked hard that day. 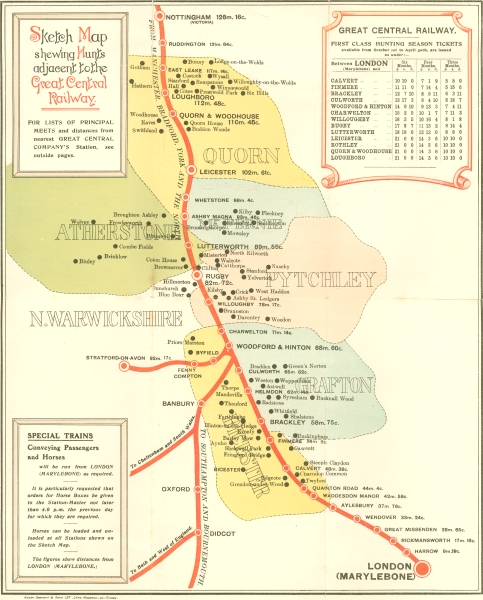 A coloured sketch map leaflet produced by the Great Central Railway in 1902 entitled 'Hunting Arrangements'. It shows the route of the London Extension as it passes through the boundaries of six fox hunts. See Details

Not only the Prince arrived for the Quorn Hunt, but many other individuals used the G.C.R., often bringing their own horses in specially constructed railway company horse boxes. None of these are used these days, it is all road transport now.