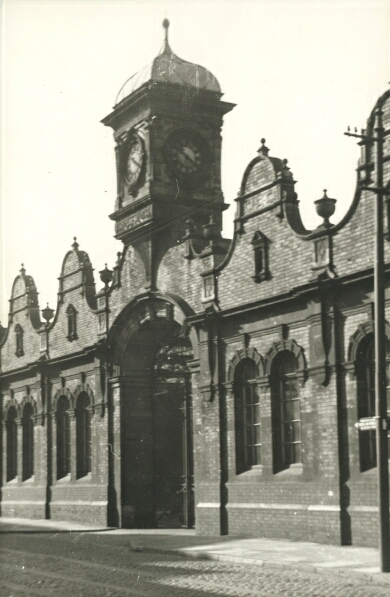 The majority of passengers who used Leicester Central station would have arrived via the main entrance on Great Central Street. The first thing they would have seen as they approached would be the main facade, built from red brick and terracotta and considered by many to be a very handsome structure. The main entrance itself was a large terracotta lined archway, which was surmounted by an ornate clock tower. Either side of this entrance was a series of arched windows and the entrance and exit openings for cabs and other vehicles. Each window was crested with terracotta mouldings which matched the knee and waist height strips that ran the length of the building. Above the windows, the roof line was adorned with fake curving gables built in a Romanesque style that included terracotta urns and pinnacles of differing styles.

To the left of the main facade was the vehicle entrance for the parcels offices. Above this gateway (with its large wrought iron gates) was a terracotta-tiled frieze that read "GREAT CENTRAL RAILWAY" over a swirl of decorative fauna. Beneath that were the words "PARCELS OFFICES", so there could be no mistaking where you were. 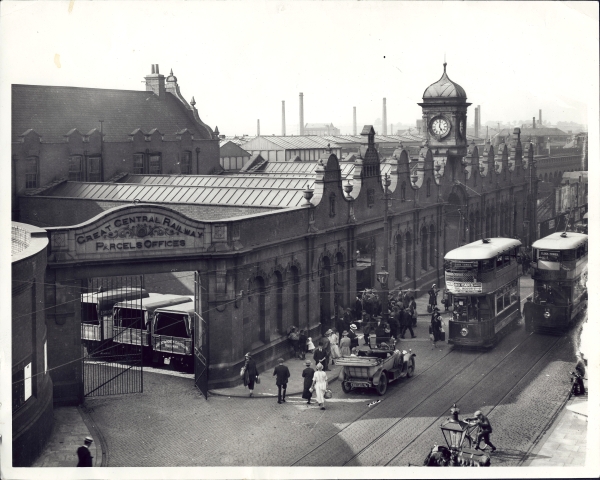 Leicester Central as seen from Great Central Street, circa 1925. The prominent and ornate gables are visible above the main station entrance along with the attractive clock tower. Interestingly, the people appear to be crowding through the taxi entrance, rather than using the main entrance beneath the clock tower. See Details

Immediately behind the main facade was the entrance hall and cab waiting area. This was a very light and airy space which was topped by a glazed roof. At the back of the hall were a series of offices including the left luggage store and cloakrooms. Between these offices was a large opening that led directly to the booking hall. Beyond the booking hall, this subway continued on through to Jarvis Street (as mentioned earlier), giving access to the station from both sides of the railway. To get to the platforms above, passengers would use the stairs that led up from this subway. Luggage was carried in a huge hydraulic powered lift that went from the booking hall to the platforms above. 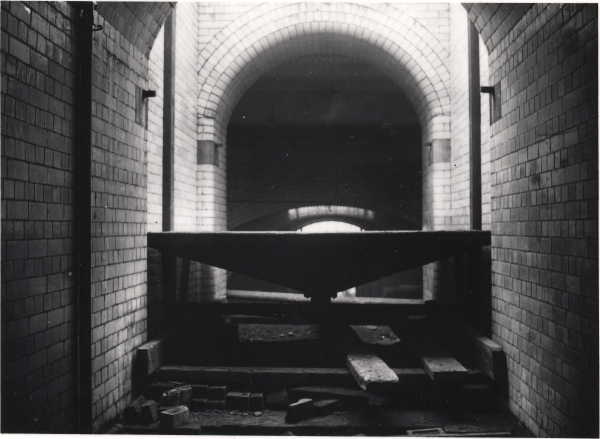 The subway and hydraulic luggage lift nearing completion at Leicester Central on 28th January 1899. The walls were lined with glazed bricks which reflected whatever light was provided, thus adding to the illumination. See Details