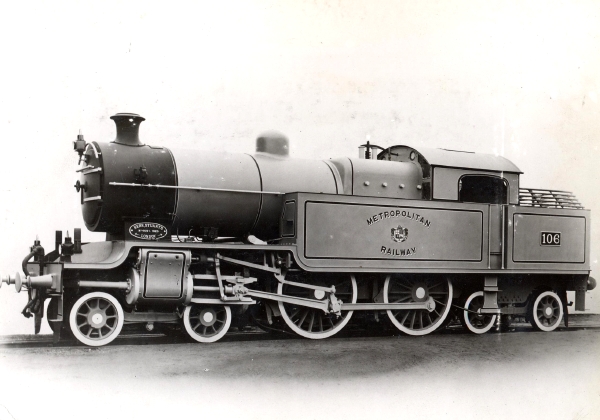 The photograph above is a fine study of the Metropolitan Railway's 'H' class, 4-4-4 tank locomotive, No. 106 (works no. 4091), which was one of eight such engines built by Kerr, Stuart & Co. in 1920. They were designed by Charles Jones (Chief Mechanical Engineer from 1906-1923) to meet the Metropolitan's need for a fast passenger tank engine, the H class were noted for their grace and style. Indeed, the Metropolitan was so proud of its handsome new stock, that it embellished them with the company's full crest. Like the E and F classes, the new H class was standardised as much as possible with the G class 0-6-4's, making spare parts cheaper and interchangeable. 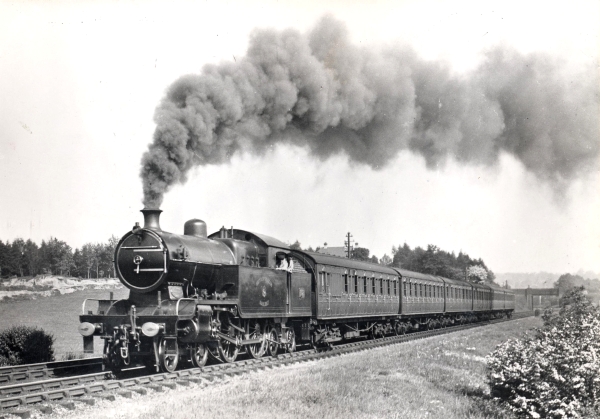 The H class locomotives were built as a fast and powerful passenger locomotive, and as such were fitted with outside cylinders and Walschaerts valve gear. They were very graceful locomotives and conveyed a sense of regality and superiority, which greatly pleased the Metropolitan. This atmosphere is clearly visible in this near perfect view of H class, No. 108 (works No. 4093), as it works hard on the climb towards Aylesbury. 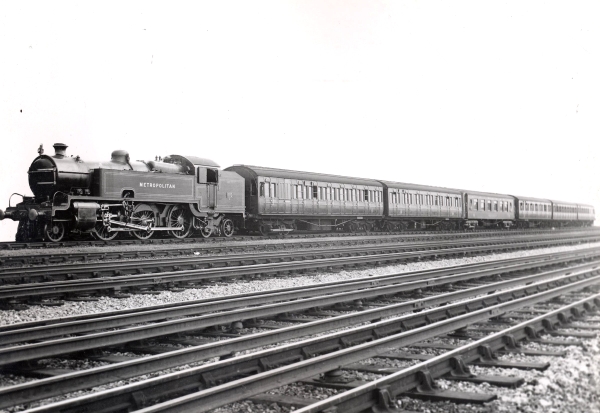 A fine view across the electrified line towards a six-car passenger train hauled by the Metropolitan Railway's 2-6-4 'K' class tank locomotive, No. 116. Built by Armstrong Whitworth & Co. in 1924, the six K class locomotives were the last and by far the biggest of the Metropolitan steam engines. They were designed by the Metropolitan's new CME, George Hally, and were very similar in design to the Southern Railway's 'N' class 2-6-0 tender engines. Note the third carriage back from the engine. This is a Pullman car, a specially appointed lounge coach that allowed passengers willing to pay a supplementary fare a chance to experience superior standards of comfort and refreshment.