The new London & North Eastern Railway (LNER) made several changes to its acquired railway system, and some of these would have been noticeable at Leicester Central. A new 'corporate' colour scheme was introduced on the station signs, and staff would have been supplied with new uniforms and badges. More noticeable would be the gradual repainting of the locomotives and rolling stock which thundered through the station. The old GCR passenger livery of mid-green was replaced by a new, lighter 'Apple Green' and the carriages would eventually appear in varnished teak. As the years went on, the familiar Robinson and Pollitt designed locomotives would be replaced or supplemented by new designs from the LNER's chief engineer, Sir Nigel Gresley. 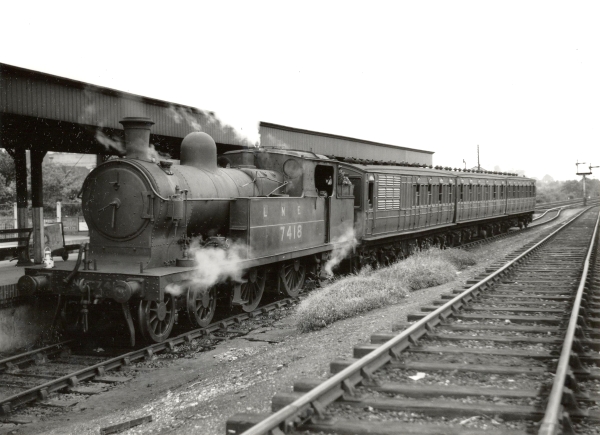 A change of ownership meant a change of livery for the old Great Central locomotives. This photograph shows former Great Central class 9L, now reclassified C14 and numbered 7418, in its new livery of black at Chalfont & Latimer station on the Metropolitan line during July 1948. See Details

With the LNER came a period of extra activity as the London Extension played host to a number of new services. A new service from York to Banbury was introduced, nicknamed the 'Rabbits', as that's what the train carried. Fish trains from Grimsby and Immingham increased, as did the demand for mineral traffic, particularly coal, and the old Great Central line was an ideal line to transport them on. Unfortunately, passenger figures did not rise significantly in this period as, by now, the car was becoming more available to the middle classes and the public buses were cheaper, quicker and took you to your door. A sign of things to come, perhaps?

The LNER's B17 class, 4-6-0's were one of Sir Nigel Gresley's designs which had found use in East Anglia. Most were named after stately homes, this one being BELVOIR CASTLE, and after trials on the London Extension, a further batch was built to work the line. The new locomotives were named after football teams and nicknamed 'Footballers'. See Details

The much demanded coal was mainly mined in the North Nottinghamshire and South Yorkshire coalfield, and wagons upon wagons of it were gathered at the Annesley yards on a daily basis. These wagons would then be marshalled into trains for the run to Woodford where they would be distributed around the country. These trains ran to a very tight schedule and forty or more such trains would travel between the two yards every day. When a loaded train arrived at Woodford, the locomotive would uncouple, move to a rake of empty wagons, and take them back to Annesley. It was that straight forward. The fast timetable of these services eventually earned them the nickname of 'Runners' or 'Windcutters'. However, by 1939, a cloud was hanging over Europe and Britain once again went to war with Germany.