Navvies: The Men Who Built The Railways 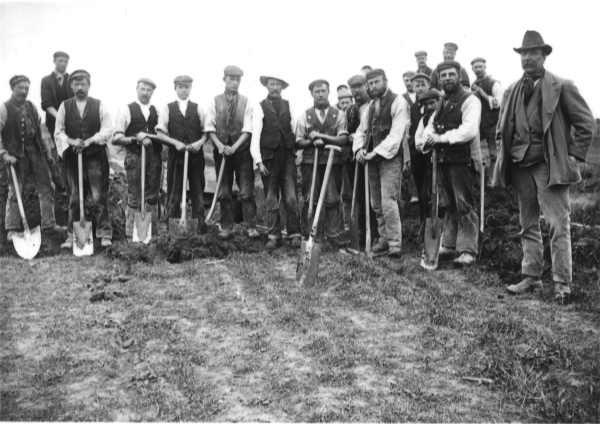 A gang of navvies near Haddenham, Buckinghamshire See Details

Although the London Extension owed much of its construction to the use of steam powered machinery, building a railway during the 1890s remained a very labour intensive exercise. Digging cuttings and forming embankments, not to mention the construction of tunnels, bridges, viaducts, stations and goods yards, all required substantial numbers of men with a wide range of skills. Collectively, these men were known as navvies, and they moved with their families to work on engineering projects right across the country. During the height of railway construction in the mid-nineteenth century, more than 250,000 navvies were employed throughout Britain.
The legacy of these travelling communities is all around us: the building of our railways was undoubtedly one of Victorian Britain's finest achievements. However, despite the navvies' large contribution to our history, comparatively little is known about their daily lives and experiences. Just as it did when the railways were being constructed, their social isolation and their unsavoury reputation for being fierce, drunken, disruptive and ungodly creates an image of the navvy that is unhelpful when attempting to discover how these people really lived.

Thankfully, S.W.A. Newton, the young photographer from Leicester who captured so much of the Last Main Line's construction, decided that navvies and their families should form a significant part of his unique photographic record. Using these images to illustrate their story, this section explores where they came from, where and how they lived, their religion and pastimes, and what happened to them after the London Extension was completed.