After the Last Train

After the last train on 5th May 1969, Leicester Central was locked up and left to rot. The remaining tracks were lifted and either reused or sold for scrap. Much of the once grand Great Central Street had been given over to industrial use, and before long, the old station booking hall was being used to store scrap metal. The viaduct arches on Jarvis Street below had become small industrial units, which just left the platform area empty and vacant. Naturally as these things go, it did not take long for somebody to realise that this was prime development land, and the bulldozers moved in during 1970. The platform buildings, canopies and the platforms themselves were all razed and replaced by an uninspiring row of industrial premises. The site occupied by the turntable became a car park and the signal boxes were removed. 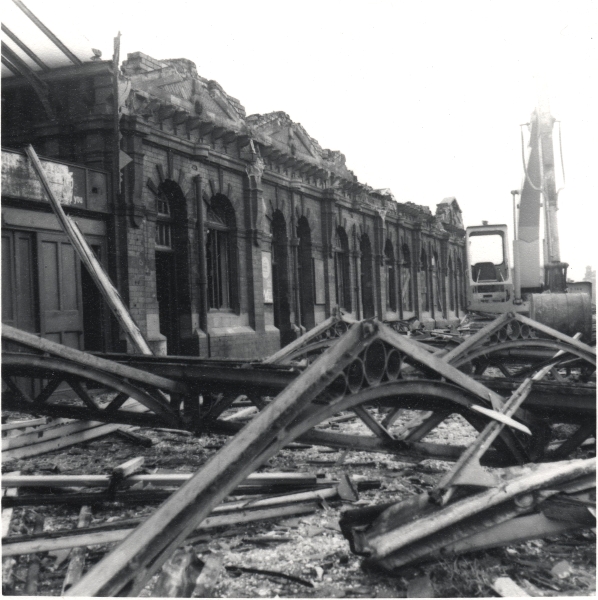 Taken in December 1970, this is a poignant view across the twisted Victorian ironwork of Leicester Central, lying beside the platform buildings at the southern end of the station. Within weeks of this photograph, the ground had been levelled completely. See Details

The fact that the station entrance hall and former booking offices had already found an alternative use as industrial workspace probably saved the buildings from demolition. Safety checks in later years revealed that the ornate plasterwork and mouldings inside were unsafe and this was removed to prevent any accidents. Externally, little changed occurred to the main buildings, although the false terracotta gables and clock tower had already been removed by British Railways and replaced by plain bricks. Even as late as 1977, the British Railways totems affixed to this wall were still to be seen, eight years after the railway closed. 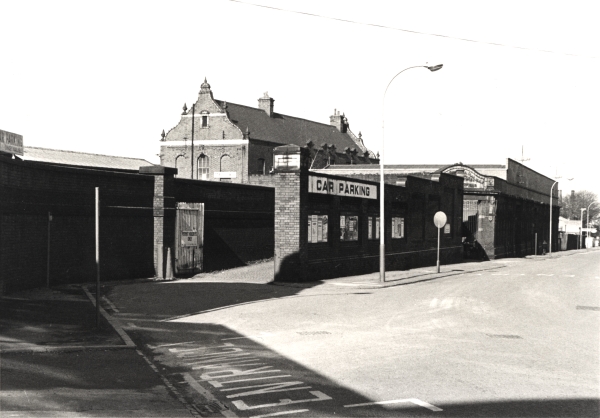 This was how Leicester Central station looked in February 1977, eight years after the closure of the railway. Much of the site is in use as a car park and small businesses have taken over the surviving buildings. Note the British Railways totems above the main entrance. See Details

By the start of the 1980's, much of the old viaduct that carried the London Extension across Leicester had been demolished. The girder spans at West Bridge had been removed to allow for road improvements, and the huge bowstring girder bridge over Northgate Street went in 1981. The former Great Central Hotel, after many years as the Great Central pub, had become the Van Damme Bar, but this eventually closed and the building became another victim of the bulldozer. As the decade drew to a close, much of the demolition and construction work around the old station had been completed, leaving the location much as it is today. 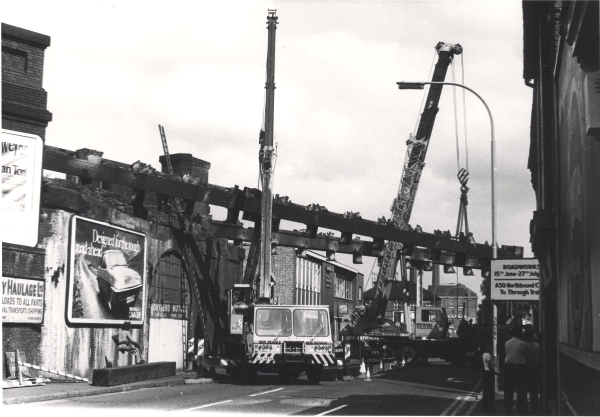 The removal of the Great Central's Northgate Street bridge in July 1981 required two cranes, the closure of the road, and a lot of gas cutting equipment. By the time this photograph had been taken, only the principal girders remained. See Details