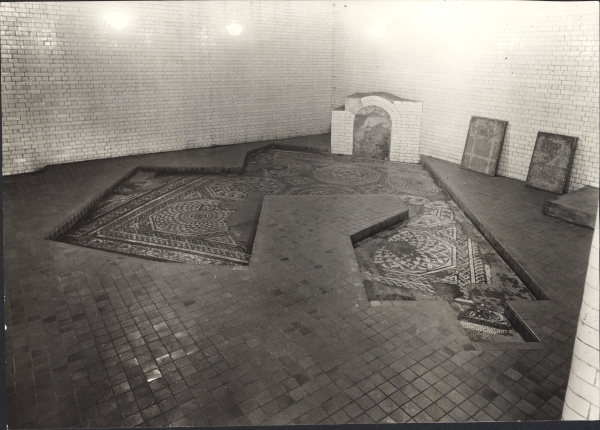 Thought to have been laid around 150 AD, this is the Blackfriars tessellated Roman pavement. First discovered in 1832 during the digging of foundations for a house at 53 Jewry Wall Street, the pavement lay beneath the proposed site of the Manchester, Sheffield & Lincolnshire Railway's station at Leicester which was to be built as part of the London Extension. The company agreed to provide access to the pavement and to ensure its preservation, and so built this room, known as the mosaic chamber. Following the line's closure in 1969, and suffering from deterioration, the pavement was lifted in the 1970s and moved to the city's Jewry Wall Museum. Note the small tiled arch at the back of the room: this surrounds a fragment of the original Roman wall. See on Route Map