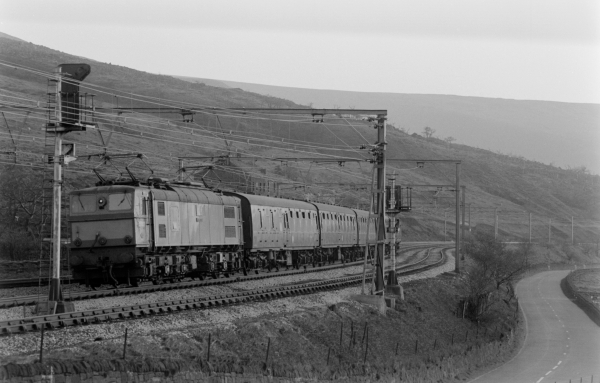 EM2 class electric locomotive on a passenger train near Woodhead.

Two types of electric locomotive were built for the Woodhead Route. The eight-wheeled (Bo-Bo) EM1 type and the larger twelve-wheeled (Co-Co) versions known as EM2's. The terms Bo-Bo and Co-Co relate to the number of driven axles on each power bogie. Here we see EM2 number 27001, ARIADNE, hauling a passenger train through the scenery that made the Woodhead Route so spectacular. Each locomotive in the class was named after a Greek god or goddess, and they survived until being sold to Denmark in the 1970's. See on Route Map